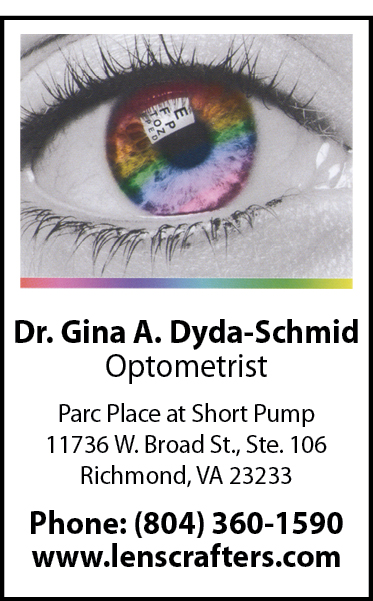 1 Star
By Visitor
I saw Dr. Dyda-Schmid 3-4 months ago and paid for an exam and bought glasses next door at the adjoining eye glasses store with the prescription that she wrote for me. I was given a trial pair of contacts. One of them ripped and I decided to call the office and order a box of contacts today, or get another trial pair for the weekend until I could buy a box. The very rude receptionists informed me that because I “never came back” to have the doctor examine my contacts again a week later, that I now was not able to get a box of contacts. Now have to make another eye appointment, pay another $40, to get a pair of contacts again. I still was not eligible for my “prescription to be released.” Then they said that I would then have to come BACK for another appointment a week later for a check-up before they would tell me my prescription, or let me buy a box of contacts. So now to simply buy a box of contacts, I have to come in, pay out of pocket for 2 eye exams to have my prescription “released”. The receptions were rude, unhelpful, and condescending. I have never heard of an office holding onto a prescription after paid services rendered, and trying to take more money just to been seen. This appointment they told me was so the Dr. could tell whether the new contacts were “working” for me or not. I had been wearing them sparsely since March, and I don’t need to pay additional money, and have 2 additional doctors’ appointments just for a Dr. to tell me what I already know. They said there was no other way for me to get a spare set of contacts at this time without coming back in for my “follow up” appointment, or buy a box. I was never told that if I didn’t come back for a “follow-up”, than I would not be given a chance to at least have a copy of my prescription and take my business elsewhere.
I ended up calling an old Eye Doctor I had not seen since 2004, as I am going out of town tomorrow. They more were than understanding and asked that I give them the eye glasses prescription so that they could transpose the numbers and give me a FREE pair of trial lenses until I could make other arrangements to buy more. I called Dr. Dyda- Schmid’s office again to get the eye glasses prescription (she had written me a prescription and I bought a pair of glasses 3-4 months prior), and the very rude receptionist was still trying to get me to come in and pay. I told her my old doctor would be more than happy to help me out, and she then stated she would not tell me what my prescription was. After a few minutes and some guessing she conceded that the glasses prescription were in fact what I thought and told me that going somewhere else would “still not help me.” I currently have a great trial pair of contacts in now that fit and work well, FREE of charge from my old doctor.
I wanted someone to know about this offices’ practices and wanted to warn others about my experiences. Not only should someone not have to re-pay if it is less than a year from the time they last paid, but they should not be met with the Spanish Inquisition when trying to get health information about themselves that is common knowledge. I feel that this business seems hurting for money in the worst way and will try anything to make someone pay for their health information. This was a horrible experience and I would like for others to stay away if at all possible! Rude classless receptionists and I can only hope that the doctors in this practice are not aware that their receptions need to be terminated for awful customer service. I would never go back here again, even if the service was free of charge, and will tell everyone I can to stay away.